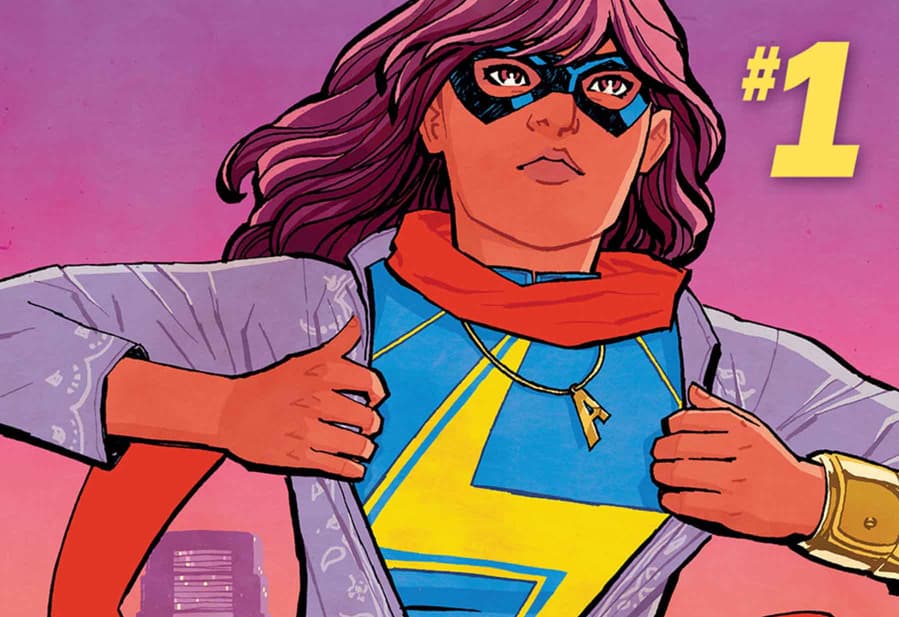 “Kamala Khan aka Ms. Marvel is moving on to her next phase — along with her most established writer and co-creator G. Willow Wilson. This week, it was announced that Wilson will pass the torch to Saladin Ahmed, who will begin his run on THE MAGNIFICENT MS. MARVEL next year.

Today, Wilson bids a fond farewell to the shapeshifting hero of Jersey City — and beyond.

Being part of the genesis of Kamala Khan has been one of the greatest honors of my life. From my puzzlement during that first telephone conversation with Sana in 2012—I was pregnant, frazzled from a long book tour, and in disbelief (You want to launch a new character? In this market?)—to my stunned amazement when the first issue went into its seventh printing, to my glee when Sana handed the first trade paperback to the President of the United States, this journey has been pure joy.

Sana and I initially had very modest expectations for this book. Our goal was to get to ten issues. It was going to be a fun side project—a young adult Muslim Super Hero! At Marvel!—that would have the lifespan of fun side projects. I budgeted a year for it. But by the time the first trade paperback hit the New York Times Graphic Books bestseller list, I realized Kamala was quickly becoming the center of my life…”

“Amy Pascal is no longer guiding the ship at Sony. But for better or worse, she’s still very much a part of the Spider-Man universe. Her latest effort as a producer, Spider-Man: Into the Spider-Verse, is earning rave reviews and is currently tracking for an opening weekend total north of $30 million. With a successful debut all but assured, the sequel will inevitably go forward. Pascal teased the animated franchise’s future in a new interview with Vanity Fair.

Pascal confirmed that the second Into the Spider-Verse installment will be directed by Joaquim Dos Santos (Avatar: The Last Airbender). David Callaham (Wonder Woman 1984) is writing the screenplay, which plans to explore Miles Morales and Gwen Stacy’s blossoming romance. Pascal said that was a plot thread included in Peter Lord’s original draft of the script.  However, it didn’t make the film’s final cut.

“I will say that Christina kept us honest,” he said. “As five boys making a movie, it was really good to have another filmmaker there going, ‘I don’t think you guys want to do it like this….” 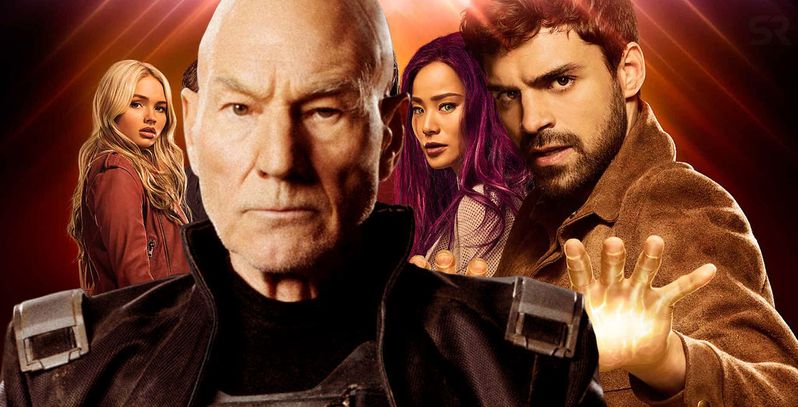 “The Gifted is an X-Men universe without Professor X as a guiding example – and that could ultimately be a good thing for the mutants in the FOX series. While the absence of the X-Men hurts the show in some fans’ eyes, The Gifted has actually seized the opportunity to tell a story about a world where mutants exist and humans hate and fear them, that just isn’t possible if the X-Men are around. The Gifteddepicts the daily horrors mutants face, but season 2 is building towards the potential for something new in an X-Men story, and the key is subtracting Professor X from the equation.

The X-Men films have centered around the dueling ideologies of Charles Xavier and Magneto. The two frenemies have spent decades promoting their conflicting visions for the future of mutants: Professor X dreams of a world where mutants and humans peacefully coexist, while Magneto wants mutants to take ‘their rightful place’ as the dominant species on Earth – humans be damned. Magneto rallies mutants to his cause as the Brotherhood, a band of mutant extremists, while Xavier fosters mutants in his school and teaches them to be the X-Men and save the world as superheroes.

“Good news, Into the Spider-Verse fans: Gwen’s solo adventure is bringing in some top-tier Spider-talent.

While we already knew that Sony’s plans for Spider-Gwen will extend beyond the wild success of Spider-Man: Into the Spider-Verse and into a solo spinoff for the character (that will include some extra Spider-pals), we’ve now got the first solid information from Sony producer Amy Pascal as to just who will twhip into action alongside the Radioactive Spider-Gwen.

As part of a wider piece about Sony’s revitalization of its Spider-Man movie stable —between its collaboration with Marvel over Tom Holland’s era with the Spider-Mantle, to the most recent critical success of Into the Spider-Verse, and the box-office boost of the not-so-critically-loved Venom — with Vanity Fair, Pascal confirmed that Gwen’s solo movie will see her team up with both Cindy Moon, a.k.a. Silk, and Jessica Drew, Spider-Woman.

On top of that, Pascal also clarified that the plans for a live action film centering around Silk are still going ahead, and are unrelated to her appearance alongside Gwen and Jess…

“Continuing its pleasure cruise, 20th Century Fox/New Regency/GK Films’ Bohemian Rhapsody has shot past $600 million at the global box office, becoming the highest-grossing music biopic of all time domestically, internationally and worldwide. The split through Wednesday is $175.7M in North America and $433M at the international box office for a global cume of $608.7M. 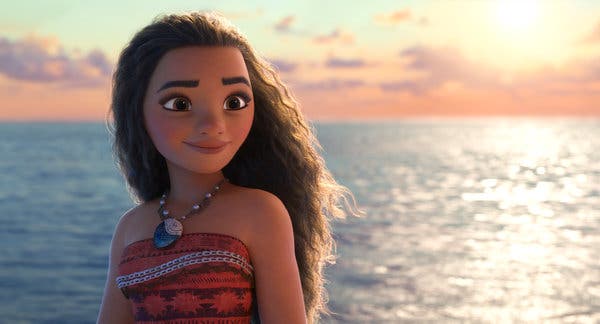 ““Trolls.” “Teenage Mutant Ninja Turtles.” “Moana.” “Inside Out.” “Wonder Woman.” All were global box-office hits that had women in leading roles.

They were also part of a broader trend. According to findings from the Creative Artists Agency and shift7, a company started by the former United States chief technology officer Megan Smith, the top movies from 2014 to 2017 starring women earned more than male-led films, whether they were made for less than $10 million or for $100 million or more.

The research also found that films that passed the Bechdel test — which measures whether two female characters have a conversation about something other than a man — outperformed those that flunked it.

“The perception that it’s not good business to have female leads is not true,” said Christy Haubegger, a C.A.A. agent who was part of the research team. “They’re a marketing asset.”

Casting women in leading roles is still more the exception than the rule in Hollywood. Women accounted for about a quarter of sole protagonists in the top films of 2017, and they played roughly a third of major characters, according to research from San Diego State University…”

“As one of the top-grossing movies of all time, it’s clear that Black Panther affected audiences, but it also had a powerful impact on its cast and crew. For Nyong’o, who had been front and center in blockbusters like Star Wars and The Jungle Book, finding a project with the potential to touch viewers on a personal level is the goal. “To be a part of something that is both meaningful and incredibly entertaining is an actor’s dream,” she said. “You want to make projects that live on long after you’re gone, that people latch onto and claim for themselves.”

Moved by the reaction the team garnered as they took the film on the road, she said her experience working on Coogler’s film was unlike any she’d had previously. The difference lay in the way the story resonated with underserved communities. “It [connects with] Africans and their diaspora, but also with other people,” she said expounding on the story’s global reach.

“When we were in South Korea all the journalists were coming in their traditional garb. This film was a reminder to people that they are from incredibly rich histories and cultures….”

“Brie Larson is attending the Brazil Comic-Con where she spoke about The Avengers: Endgame and Captain Marvel.

The panel also saw a Captain Marvel extended trailer shown off with brand new footage.  This past Monday saw the second Captain Marvel trailer drop, with the first The Avengers: Endgame trailer having been released just yesterday.

“She’s the strongest character in the Marvel universe, and she’s coming at a very interesting time, is not she?” Brie Larson joked, referring to the events from Infinity War and the upcoming Avengers: Endgame.

Brie Larson was also asked about battling Thanos and if she could have saved the Avengers from all the destruction, which also saw her joke and cut herself short by replying, “Well, if I want…”

“It takes three women to do Captain Marvel, but I trained for nine months, I was able to lift more than 220 pounds, I [trained in] judo, taekwondo. I dedicated myself a lot,” Larson said…” 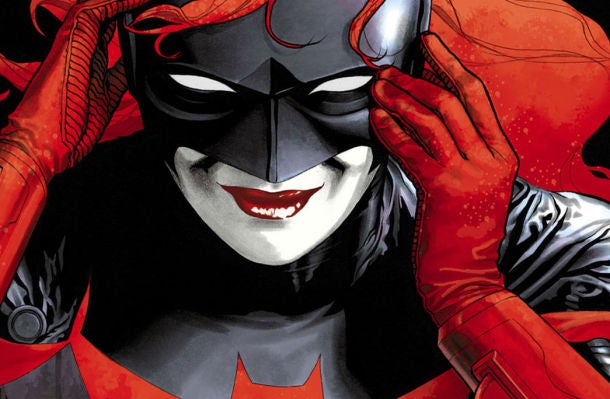 “In many ways, Kate’s superhero evolution mirrors Batman’s own. She comes from a wealthy family that helped build Gotham into what it is today. She has her own advanced training, high-tech gadgets and a helpful assistant (in this case her father, Jacob). But in other ways she’s a vastly different character, whether because of her military background, her romantic ties to multiple GCPD officers or the fact that her own twin sister is basically her personal Joker.

Like most Gotham vigilantes, Batwoman has no superhuman abilities, but she doesn’t need powers to carry out her missions. She’s an expert martial artist whose skills have been honed by her time at West Point and growing up with an ex-Army colonel for a father. Kate also has extensive firearms training, though like Batman she tends to forgo guns in favor of her fists and other non-lethal weapons…”

“The film’s status as Oscar frontrunner for Best Animated Feature was confirmed over the weekend when four different critics organizations — Chicago Film Critics Association, Los Angeles Film Critics Association, New York Film Critics Online, and the San Francisco Film Critics Circle — named it as their best animated film of the year. The awards capped off a stellar week for the film in which it was also nominated for a Golden Globe and seven Annie Awards, the latter being tied for the most Annie nominations of any non-Disney production.

Cartoon Brew is tracking every year-end animation honor via our Animation Award Tracker, and Spider-Man has now picked up more honors (7) than the next two films combined — Brad Bird’s Incredibles 2 and Wes Anderson’s Isle of Dogs, each of which have come up with three honors…”